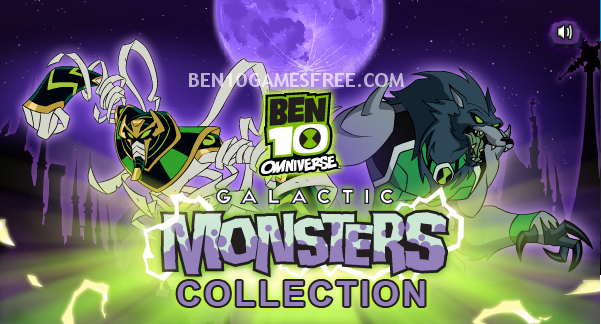 Ben 10 Galactic Monsters Collection game is built after the Ben 10 Omniverse series and it is no doubt one of the most played Ben 10 omniverse game online. With the superpowers of Snare-oh and Blitzwolfer, you must kill all the alien creatures and robots to save the city.

But before you get ready for the action, you need to check out what to expect from this game. Read the gameplay provided below for the same.

Talking about Ben 10 Galactic Monsters game, there is a collection of 20 different levels in this game. But unlike other ben 10 games where you have many Ben 10 aliens to choose, in this game you get only two choices – Snare-oh and Blitzwolfer.

Don’t worry, these two are enough to do the all the killing in the game. Also, they have different superpowers that will help you go through the different situations that come during the game play.

In order to complete the level, you must kill all the alien monsters and robots. Not only that you collect all the orbs/gems and finally reach the warp gate at the end of the level. If you miss any of these the gate won’t open.

Remember, you must avoid getting hit by the fireballs attacked by the robots else you will die.

Well, that’s all. Now, you have to show your skills and win Ben 10 Galactic Monsters.

Don’t Forget to give your rating for Ben 10 Galactic Monsters game and share your tips and tricks to win this game in the comments section below.