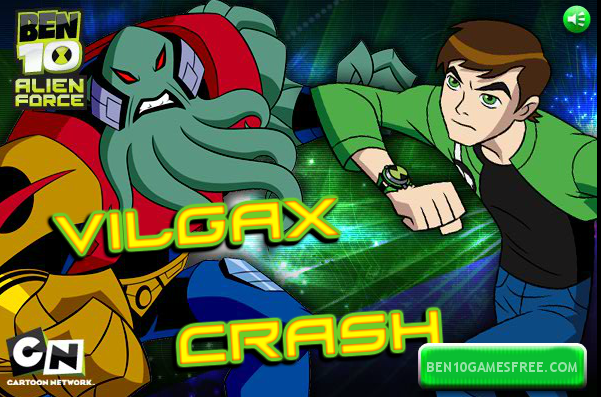 Do you hate the evil Vilgax too? Well, then here is your chance to catch him and destroy him. Play Ben 10 Vilgax Crash online and chase evil Vilgax as he tries to escape the crashing airship! Don’t worry you have Ultimate Swampfire for this mission.

Ben 10 Vilgax Crash is a total space adventure and one of the most popular Ben 10 Alien Force Games. The backstory of this game is that Vilgax is flying away in his airship while Ben with his Plumber friends attacks his airship.

Due to the attack, Vilgax’s airship begins to crash towards earth accelerating fast every passing moment. As always, Vilgax plans to escape the crashing airship. While Ben has only a little time to catch him before the ship crashes and gets destroyed.

Talking about the gameplay of Ben 10 Vilgax Crash, unlike many other Ben 10 games, you get to play only with one alien. But don’t worry that won’t make you any weaker because the alien you will play is Ben 10 Ultimate Swampfire!!

There are a total of 11 levels to play and in each level, Vilgax is moving a step ahead of Ben 10. And to stop you in your way, there are robots and turrets that solely aim at you. Destroy whatever comes your way using the Ultimate Swampfire bolts.

Pro Tip: Use the red colored reflecting pads to shoot cleverly without going near. They will bounce off the bolts and destroy the enemy.

The games difficult level after level until you reach the last level where Vilgax himself is there with his robots. Attack him and destroy other robots before they attack and kill you.

Well, that’s all you need to know about Ben 10 Vilgax Crash game. Now, just get started as a space adventure awaits you.

Chase Vilgax and destroy his Armed Robots. Stop him from escaping the crashing airship to Win! Good Luck!!

Don’t Forget to give your rating for Ben 10 Vilgax Crash Game and share your tips and tricks to win this game in the comments section below.