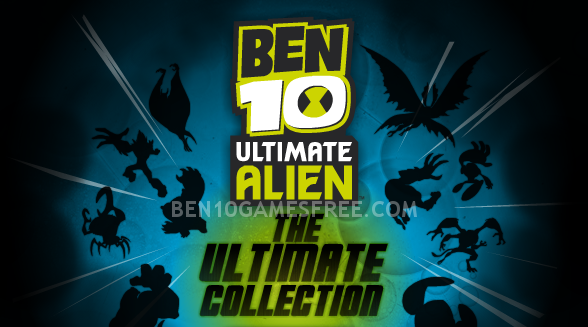 That’s not all, as you win more levels, more aliens will be available to choose. Basically, Ben 10 Ultimate Alien Collection is a superb dose of ben 10 gaming for all the ultimate alien fans!

Ben 10 Ultimate Alien collection is a multi-level game and each level has two different modes to play i.e. Easy and Difficult.

Beginning with Swampfire in the very first level you will be able to unlock and play with 10 different aliens in twenty different levels! Each level has a set of enemies in form of aliens and robots. You aim is to destroy them all and reach the exit wormhole!

To kill the enemies, like always, Ben 10 ultimate aliens have their superpowers to help you complete the challenges in each level. From Humongousaur’s Super punch to Jetray’s Dash attack, you can use all the superpowers given below to blow the enemies up into ashes.

Wait, you got superpowers that does not mean the game is going to be easier. Let me tell you the enemy aliens will be constantly attacking you with their weapons. You have to escape their bullets as well as attack them too. Even if you get hit a single time – GAME OVER!

That’s not all, even if you kill all the enemies, the wormhole still won’t open unless you collect all the orbs too. There will be three types of orbs i.e. Yellow gems, Magenta pearls & Green orbs.

Once you collect them all and destroy all the enemies the wormhole will open. And as soon as you reach the wormhole, the level will be completed.

So, ready for the adventure? Go ahead and play Ben 10 Ultimate Collection game online now!

Play with 10 Ultimate Aliens and complete all the thrilling levels to win! Good Luck!!

Don’t Forget to give your rating for Ben 10 Ultimate Alien Collection Game and share your tips and tricks to win this game in the comments section below.