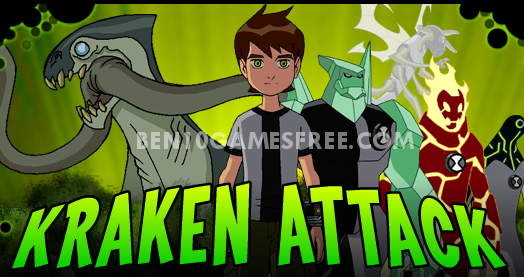 Here we are again with another exciting ben 10 game for all you gamers. Check out Ben 10 Krakken Attack game where Ben tackles a deadly lake monster with the help of Heatblast, Diamondhead, Upgrade and Stinkfly. Are you ready for this adventure?

Ben 10 Krakken Attack is no doubt an interesting game. It’s once again the time when the planet is in need of the superhero. The evil lake monster Krakken has emerged again and attacking everything around. It’s hero time. Only Ben 10 can send it back to where it came from and save the earth.

This is a multi-level game and in each level, Ben transforms into a different alien. Your mission is to use the powers of the Ben 10 aliens to attack the Krakken monster and send it back down the lake.

There are a total of four aliens available in this game i.e. Heatblast, Diamondhead, Upgrade and Stinkfly. The first level of the Ben 10 Krakken Attack game features Heatblast. Heatblast runs around the lake in which the Krakken has risen.

You have to attack Krakken so that it goes back inside. It will attack you too and you must escape it’s attack in order to complete the level. If you get hit, your health will decrease. Especially, avoid the Blue Plasma bursts or destroy them before they reach you.

Pro Tip: Keep changing your direction of running so that Krakken gets lesser chances to attack you!

You must attack and decreases Krakken’s power to zero within the time limit to complete.

So, that was all. Now it is your turn to go to the battleground and win.

Send the deadly lake monster Krakken back with the help of Heatblast, Diamondhead, Upgrade and Stinkfly to Win. Good Luck!!

Don’t Forget to give your rating for Ben 10 Krakken Attack game and share your tips and tricks to win this game in the comments section below.