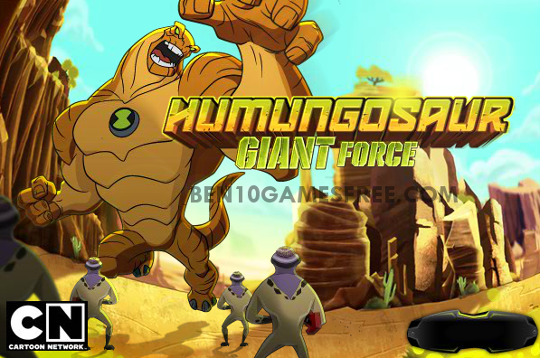 The most powerful Humungousaur is up against the deadly army of DNAliens in this new action game – Ben 10 Humungousaur Giant Force.

With the superpowers of Humungousaur, you smash your way through the army of DNAliens and kill them all before they execute their destructive plans.

This unique action game is based on the famous Ben 10 Alien Force series. The game features one of the strongest alien, the giant Humungousaur. The DNAliens come in vehicles or individually and attack you; just destroy whatever comes your way with punches and kicks.

Use Humungousaur’s powerful punches to kill DNAliens and kick their vehicles with giant force. You can also pick up the thrashed vehicles and throw them on the walls to break them. If there’s nothing else, just punch and kick the walls to make your way through them.

That’s all. It’s hero time because the DNAliens needs some serious beating.

With the Giant force of Humungousaur, smash your way through the army of DNAliens to win. Good Luck!!

Don’t Forget to give your rating for Ben 10 Humungousaur Giant Force game and share your tips and tricks to win this game in the comments section below.